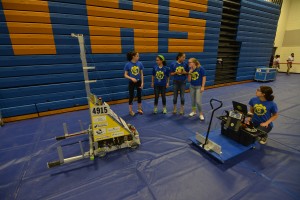 Girls Generation, a robotics competition using last years game but run entirely by girls, was once again a successful venture for Spartronics, as we made it the elimination rounds and received 4th place. The drive team for this competition had Clio Batali and Quinn Dassel as drivers, Erin Kempkes as Human Player, and Aila Ikuse as the student coach. We had many of the boys come out to support us, and the crowd was a sea of blue. The competition was a fantastic experience, especially for the new girls as it gives them a head start.

The team is excited for Kickoff, which is on January 7th, as a teaser word has been released by FIRST robotics. The next challenge will have something to do with the word “Medieval”. As the time to Kickoff approaches, the team will be getting ready for another season.