FIRST debuted on Bainbridge Island, WA (23,000 residents) in 2013. Spartronics Team 4915 came into fruition led by a small yet incredibly dedicated group that included a student leader, a Boeing engineer, the head of our local high school science department, the District’s STEM coordinator, and a local marketing executive who had established Washington FIRST’s Facebook page in 2011.

FRC Team 4915 – Spartronics – was the first formal robotics program in the Bainbridge Island School District. Under the leadership of Bainbridge High School Science Department chair and Physics teacher Enrique Chee, we started from scratch, without any prior FRC, FTC or FLL-related FIRST teams. In our Rookie season, we competed with some 30 students, including 4 girls, 9 professional mentors and Coach Chee. 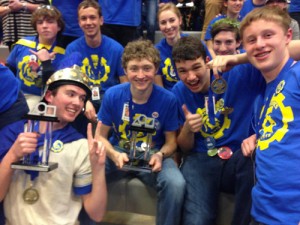 In our second year – 2015 – due to incredible community support and extensive outreach, Spartronics doubled our team size to some 50 students of which 16 were girls – four times the number that we had in our first year! We also had a dozen professional mentors and of course, our tireless Coach Chee. At the

The first time we competed at this event — our 2nd year all-girls team were on the Alliance that placed 2nd in the tournament.

In our third year – 2016 – we grew to 53 students and a record number of more girls 18, as well as 15 professional mentors and more sponsors than ever before. It was in 2016 that Spartronics implemented the most exciting change to its team yet: We transition to being fully student-managed and operated, as we are committed to teaching critical thinking and deliberate action, foster self-determination, and encourage the growth of leadership skills amongst ourselves. Our goal is to maintain our successes while teaching our members the skills of proactivity and the power of deliberate action. The burden of accountability and responsibility is greater on us — the students — but we have accepted the challenge with energy and zeal.

In 2017, we built HELIOS, the Highly Efficient Launcher and Intake Oriented System. The continued efforts from students and mentors of the team secured us several awards. These same efforts also propelled HELIOS into 1st place in our district after the second week of District Event Competitions.

While the 2018-2019 Competition Season may not have been our most successful, as we didn’t make it to Worlds, the team still considers it a very valuable year. For the first time, Spartronics built two robots! While only one of these identical robots could actually go on to compete, having two robots gave us more time for the robot to be tested and for drive team to practice. The support from our community was also stronger than ever – 28 sponsors supported us! 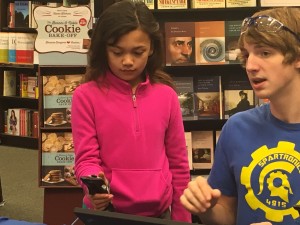 Now in our seventh year and our fifth year as 100% student led, Spartronics fields a team of 56 students, 18 professional mentors, and our Coach Chee. We’re excited about this year’s game, Infinite Recharge, and hope to have a great Competition Season!

Since our inception, Spartronics 4915 has grown to be so much more than just building robots: we have evolved as a team through our own internal development (diversity, expansion, and transition to student leadership), and our community impacts (as they have evolved with us). We know that we are a young team, but we are passionate about our cause and have already become more than the sum of our parts. The years before us are exciting, and now 4915 hopes to venture into the unknown just like the roots in Destination Deep Space.