After experiencing a series of crazy mishaps and overcoming overwhelming odds, Spartronics Team 4915 won the District Event Championship as part of an unusual four-team winning alliance at the FRC FIRST Robotics District Event at Glacier Peak on 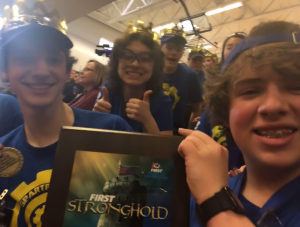 Sunday, March 13. It was only the second time in Spartronic’s three-year history to win a District Championship.
Spartronics also won the highly-coveted “Excellence in Engineering” Award sponsored by Delphi and mentor Kevin Hawkins was announced as a Woodie Flowers Award Nominee for his contributions to the team.

The 2016 game Stronghold presented punishing challenges to many robots at Glacier Peak: of the first 7 games Spartronics played, only one game had all three robots in their alliance finishing the match – which they won. It was common throughout the two-day competition to see robots disabled on the field. Communication problems also plagued ARES, the teams 2016 competition robot, and Spartronics found themselves paralyzed during several matches. The team finishing the tournament ranked 33rd out of and went into the Alliance selection round — where the top 8 teams get to pick their 3-team Alliance for the Quarter Finals — not expecting to be selected. 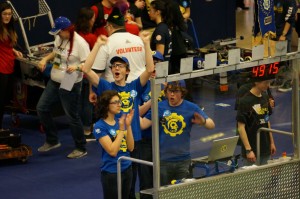 Amazingly, Spartronics was the last team chosen for the final competition – selected as the final 24th team, by Royal Robotics Team 2522 and CPR Team 3663, the Number One ranked alliance! CPR, well-known for their scouting acumen, has Spartronics ranked 15th on their list, based on the team’s individual performance, regardless of their alliance. In fact, Spartronics finished the tournament ranked 9th in Goal Points and 18th in Autonomous Points. Our tradition of consistency in autonomous points continued, after an initial software glitch that was cured after our first few matches.

For the first time, Spartronics was unable to get their robot ready for a match — and of all the times it could occur, it happened during the finals. Fortunately, Spartabots, Team 2976, came in for Spartronics and together with Royal Robotics and CPR helped to win the final match with a record score for the tournament. All four teams were recognized as Glacier Peak District Event Champions.

It is rare for a 3-year old team to win a FIRST Engineering Award, but Spartronics took home this prize at Glacier Peak. This 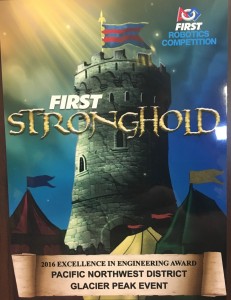 Judges were impressed — as were many other teams — with the 14″ Omni Wheels the team developed. The wheels were designed and custom built by the team, with the two back wheels being made out of wood and traction rubber, and the two front wheels were metal Omni Wheels. Skunkworks Robotics Team 1983 helped us out, taking our CAD file and used their water jet to help cut the Omni Wheels out of metal.

Kevin Hawkins, one of the founding mentors of Spartronics, was nominated by students for the Woodie Flowers Award. This award “celebrates effective communication in the art and science of engineering and design.”  Dr. William  Murphy founded this prestigious award in 1996 to recognize mentors who lead, inspire, and empower using excellent communication skills. Kevin will be among top mentors eligible for selection as a Woodie Flowers Award Finalist at the Portland Regional Competition. 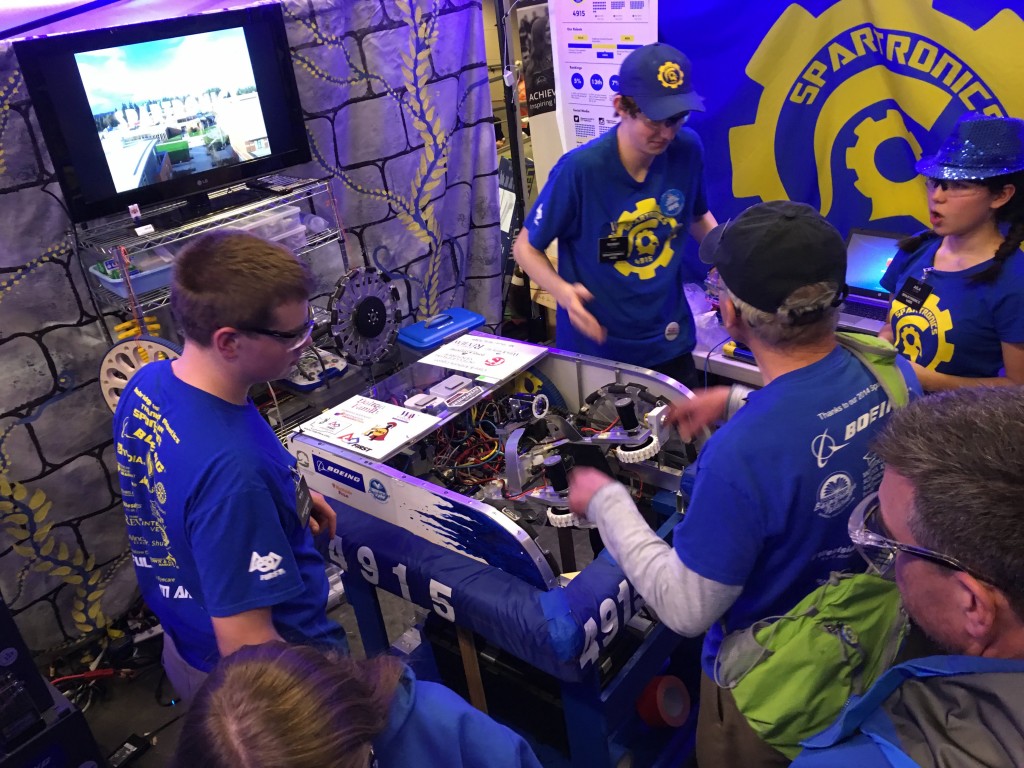 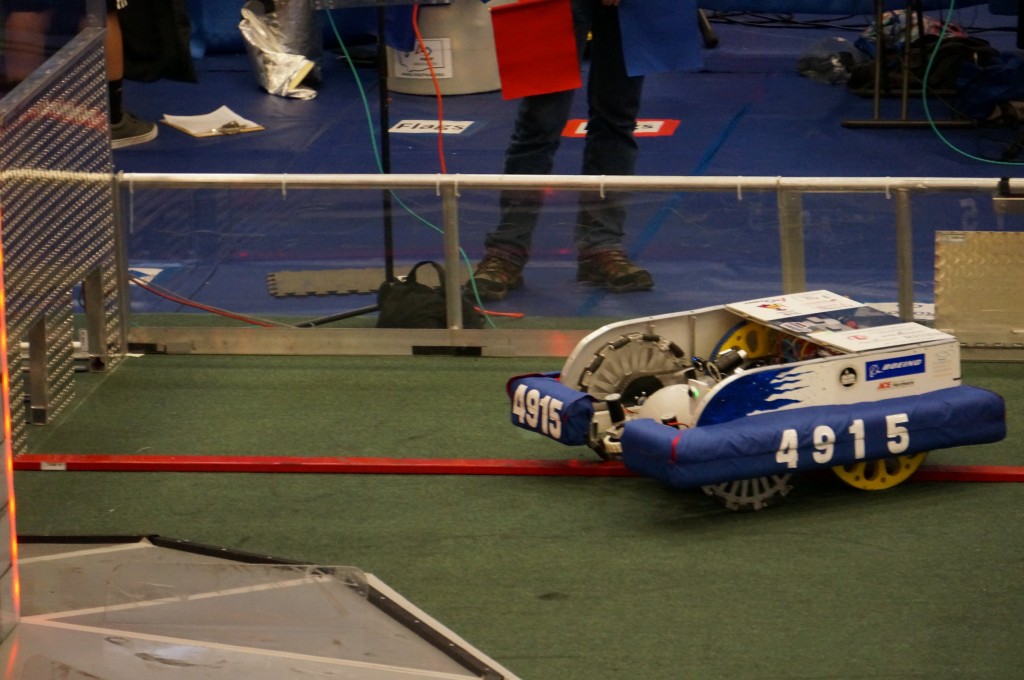 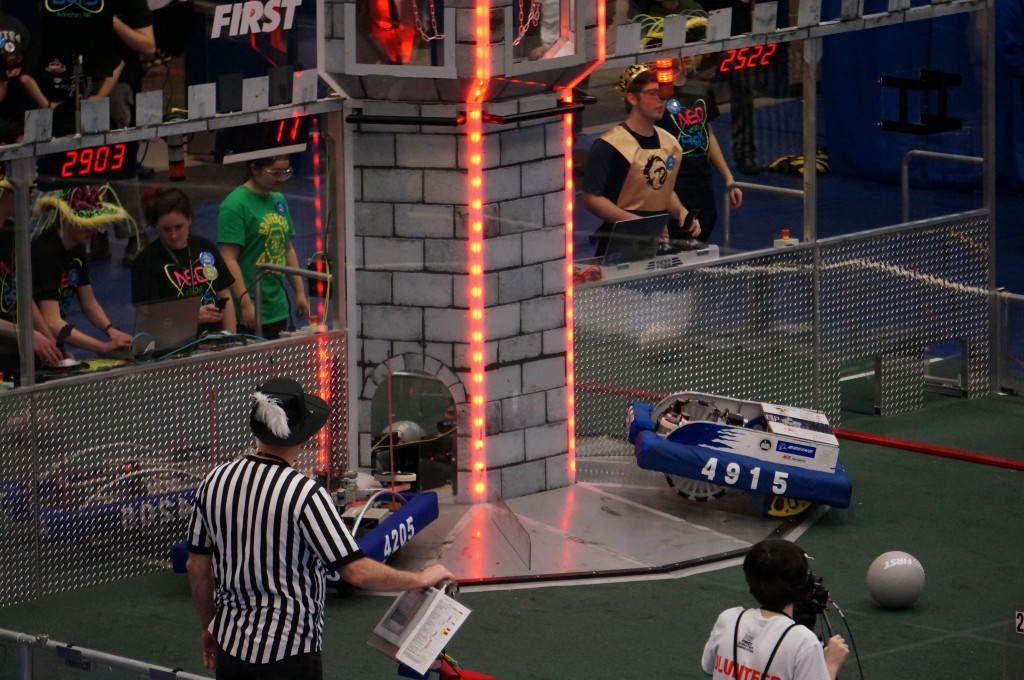 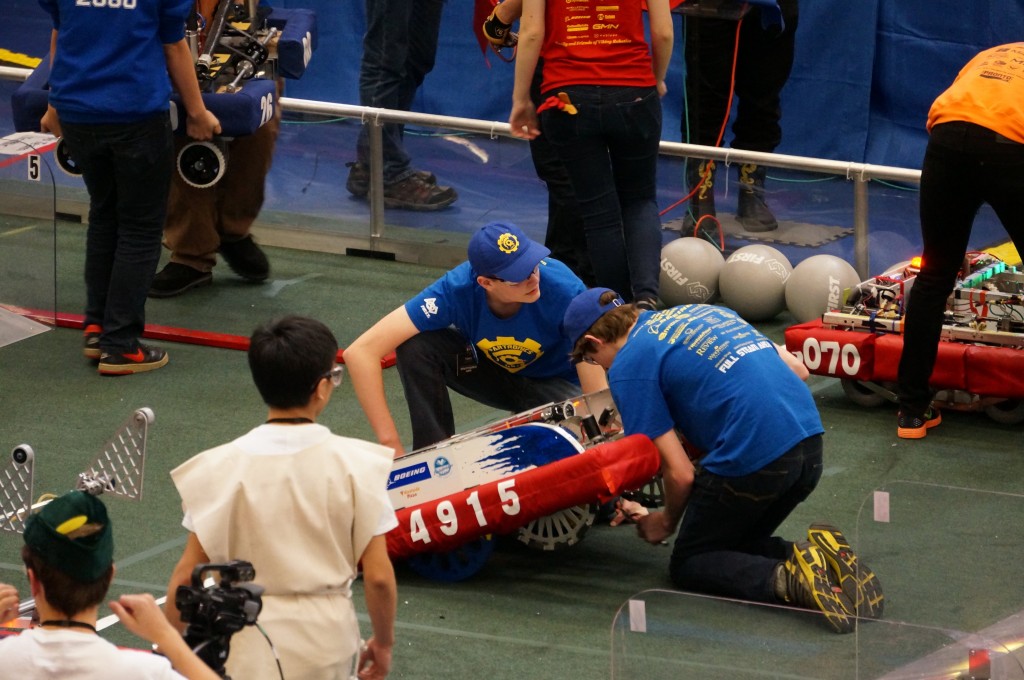 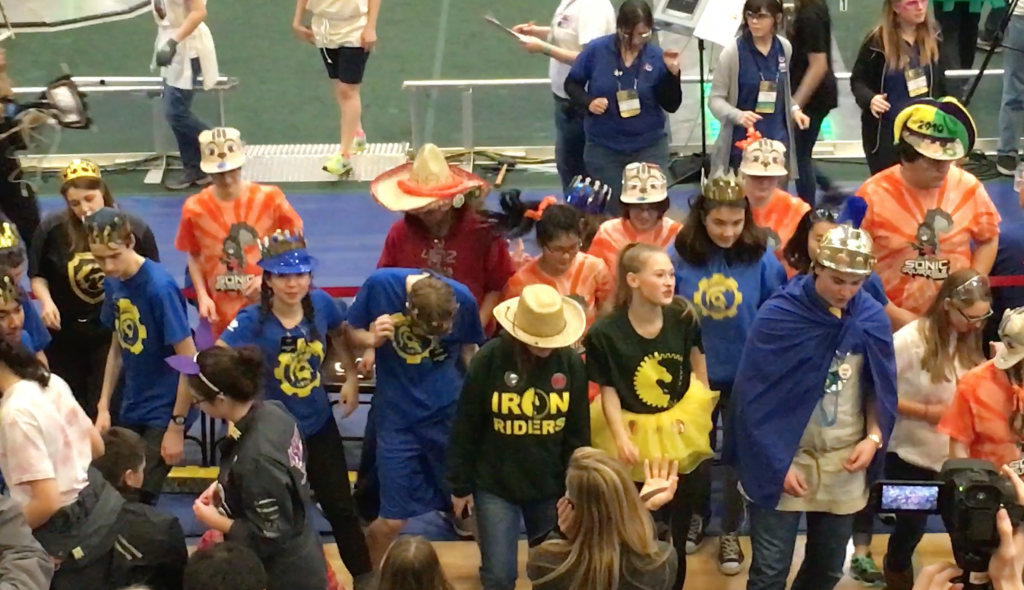 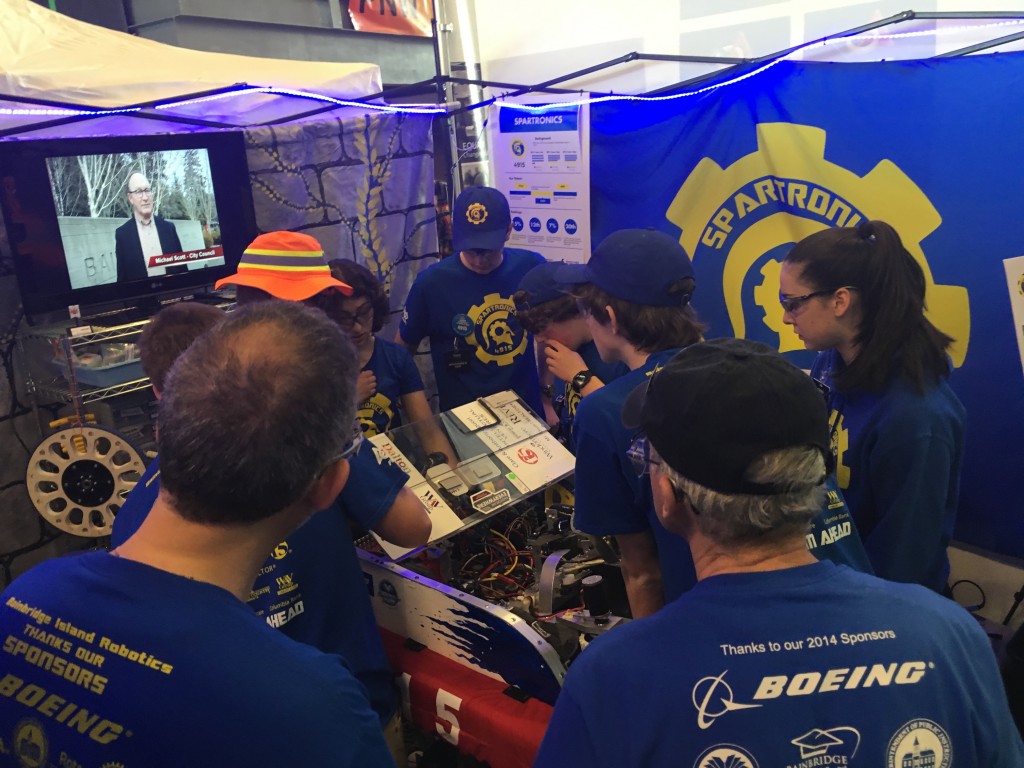 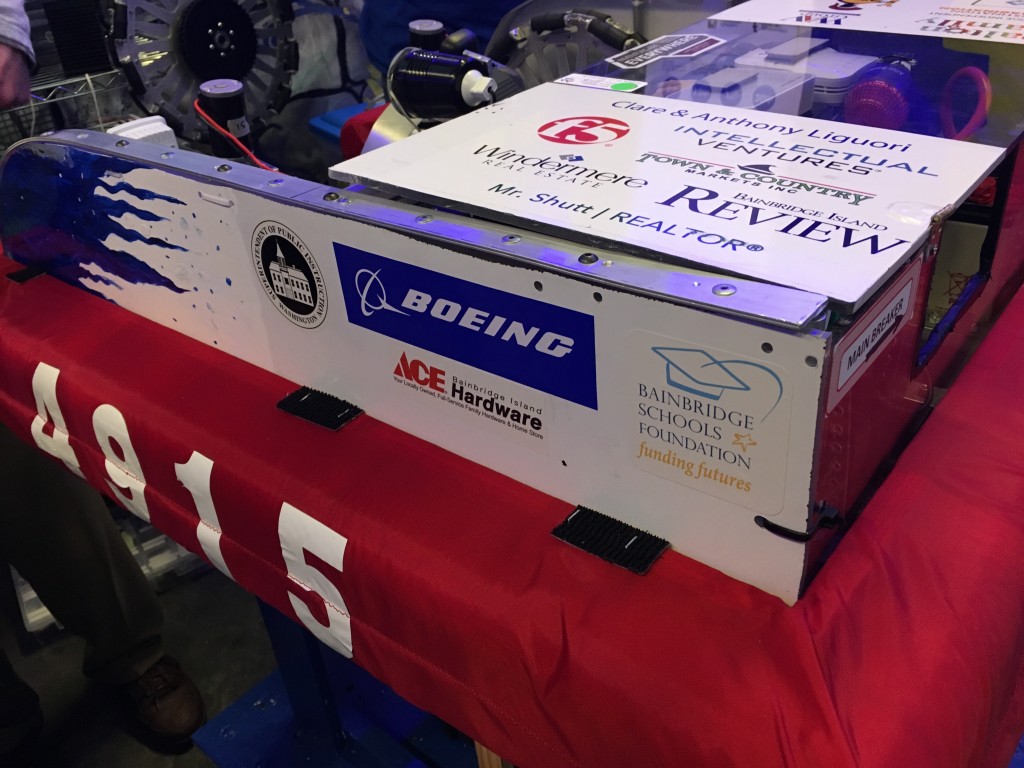 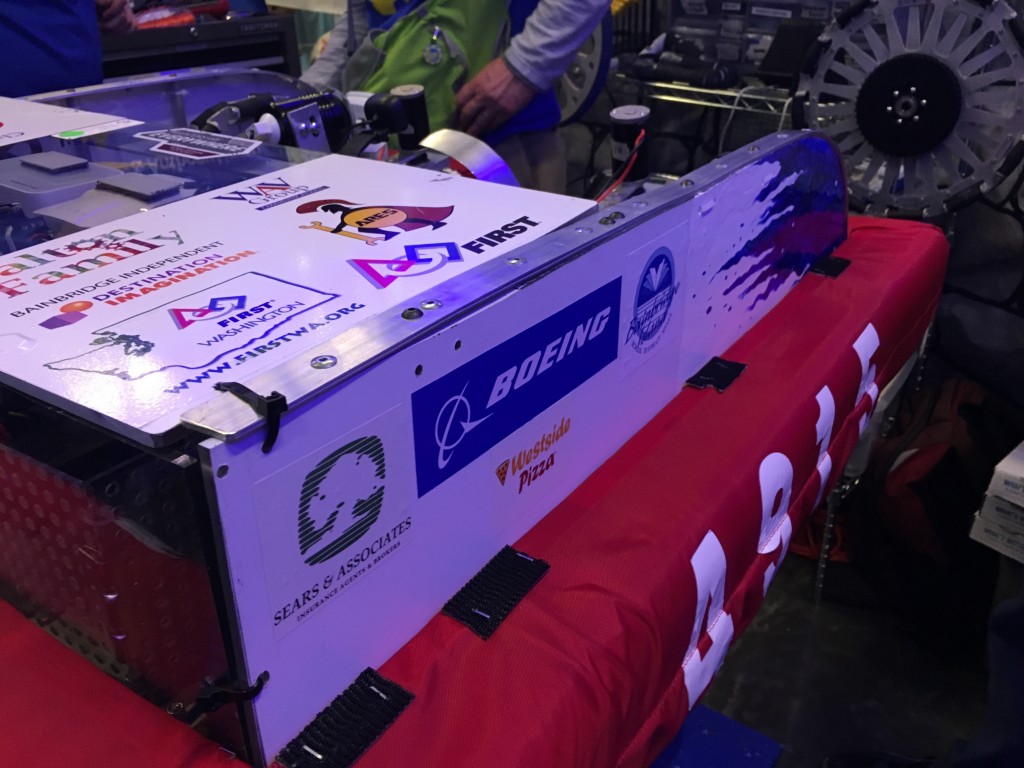