Spartronics Team 4915 became District Event Champions this weekend, winning the FIRST Robotics Competition District at Auburn Mountainview High School. Finishing qualifying matches with a 10-2 record, Spartronics was ranked #1 at the end of regular competition – a first in the team’s history. The team went on to win the District Event, with the Alliance the Spartronics were able to select as the first team captain: 2nd-year Rookie team Apex Robotics Team 5803 from Seattle Christian School in SeaTac, WA and Central Kitsap “Rock” Robotics Team 3223!

HELIOS was the star of the competition as the best shooting robot at the event. Our Drive Team of Clio Batali, Alex Larson Freeman, 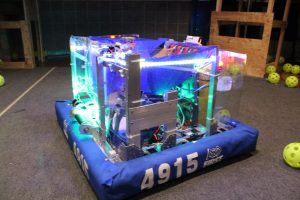 Will Hobbs, Jon Coonan and Lucas Rininger did a SPECTACULAR job and kept it together despite several challenges that caused last minute, nail-biting drama to get the robot ready for action during the Finals.

And our programmers: Can we RAVE about our programmers too? We won a peer award from SOTA Bots at Auburn for “Coolest Autonomous!” HELIOS, due to the hard work and dedication of our amazing programmers (with special kudos to Woodie Flowers Mentor-nominee Binnur Al-Kazily for her support and guidance), shoots up to 10 balls into the Boiler during the autonomous period and moves back toward the Airship and did this remarkably well both days of competition!

Then there is Coach Chee: Without his continued leadership and exceptional guidance to our team and its student leaders, we would not be where we are today!

The icing on the cake was the announcement near the end of the Awards Ceremony at Auburn that Spartronics was the winner of the coveted “Engineering Inspiration Award,” one of the highest honors, second only to the Chairman’s Award. The award, according to FIRST:

This is an award that recognizes the efforts of the ENTIRE TEAM of Spartronics, with special kudos to our Marketing Subteam. Led by Jon Coonan, they provide our community outreach and our communications efforts at each competition. There was extra hard work for the Chairman’s Award submission, especially from Charlotte Larson Freeman, Jennifer Allen, and Finn Mander, with more help from Gabe Travis, Samantha Rosen and Lukas McWilliam.

at the Pit and the design work of Ethan Rininger and efforts of Luke Frank too. Last, but never least, we thank our stellar Marketing Mentors: Kevin Hawkins (pictured to the left with Kevin Ross, Founder of FIRST Washington Robotics), Bill Davis (Pit meister), and Chris Rininger (who was the champion of efforts to get a climber added to HELIOS before Auburn). These mentors helped us tell our story about all of the community outreach efforts and gave guidance on every project and all of our social media activities. Our incredible Sponsors also deserve credit for this award because without their support, we would not be able to conduct all of the events and outreach we are able to do because of their support!

Series of “FIRSTS” at Auburn

Our robot, HELIOS, helped the team accomplish a number of “firsts:”

Spartronics won our first District Championship in 2014 at Shorewood, and our first “Engineering Inspiration Award” at Glacier Peak (2015).