The results are in from the FIRST Worlds Championship in Houston and teams from the Pacific Northwest District scored big! While Spartronics did not compete at Worlds this year, many team members watched the live broadcast. Bellevue’s Team 948, NRG (Newport Robotics Group) was on the Einstein Field and in the Finals as part of a four-team alliance that included the world renown FRC Cheesy Poofs. But their Alliance lost in the tiebreaker 114-103. 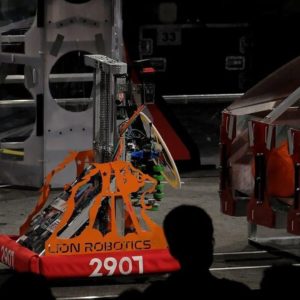 But the Pac Northwests still had some huge winners, and Spartronics send our shouts and CONGRATULATIONS to: 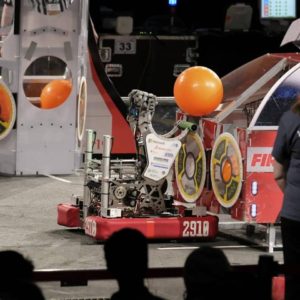 Jack in the Bot at World’s Houston

The Quality Award sponsored by Motorola was won by Team 2910, Jack in the Bot, Mill Creek, Wash. (Carver-Newton Division). 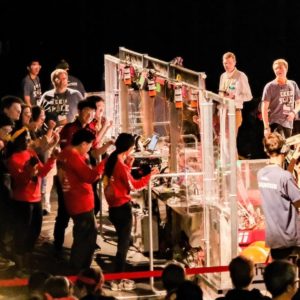 CyberKnights Team 4911 at World’s in Houston

One more shout out to Team 4911, CyberKnights from King’s High School in Seattle. We started at the same time as FRC Teams and they finished 9-1 in the Carver Division at Worlds and in 2nd Place! The swept in the Quarterfinals but lost their second match in the Semi Finals by 3 points, 106-103. We also need to give credit for the photos used here from World’s, courtesy of CyberKnights Facebook page! Thanks 4911.

Here is the full news release from FIRST with all of the World’s winners and award recipients:

More than 15,000 Students from 40 Countries Competed with Team-Built Robots and Showcased Innovation Skills with Support from Presenting Sponsor Qualcomm and Other Global Brands

This past weekend, more than 15,000 students from around the world traveled to Houston, putting their innovation skills to the test at the annual FIRST Championship Presented by Qualcomm Incorporated, held at the George R. Brown Convention Center, Minute Maid Park and Discovery Green. 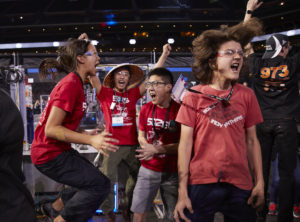 Over 15,000 students, ages 6-18, participated in FIRST Championship Houston. FIRST Championship, the world’s largest celebration of science, technology, engineering, and math (STEM) for students, will continue next week with 15,000 more students in Detroit (April 24-27).

Among the participants, many earned honors for design excellence, competitive play, research, business plans, website design, and teamwork. A not-for-profit organization founded in 1989 by inventor Dean Kamen, FIRST (For Inspiration and Recognition of Science and Technology) inspires innovation and leadership in young people through engaging, team-based robotics challenges.

In Houston, more than 700 robotics teams from 40 countries competed and exhibited in the four FIRST programs, including FIRST® LEGO® League (ages 9 to 16, varies by country); FIRST Tech Challenge (ages 12 to 18); and FIRST Robotics Competition (ages 14 to 18). In addition to the high-energy robotics matches, 60 teams participated in the FIRST® LEGO® League Jr. (grades K-4, ages 6 to 9) World Festival Expo.

At Minute Maid Park, FIRST, unveiled FIRST®RISESM, a unified season theme for all four FIRST programs that is powered by Star Wars: Force for Change, a philanthropic initiative from Lucasfilm and parent company Disney. This 2019-2020 season, themed around building sustainable cities for our future, is setting out to inspire citizens of the galaxy to work together, strengthening and protecting the Force that binds us and creating a place where collaboration and collective wisdom can elevate new ideas and foster growth. The reveal video was narrated by Mark Hamill.

The 2019 winners of the competitions and awards announced in Houston are as follows:

Dean’s List Award – This award celebrates outstanding student leaders whose passion for and effectiveness at attaining FIRST ideals is exemplary.

1. FIRST® Robotics Competition Championship – FIRST Robotics Competition combines sports excitement with the rigors of science and technology. Under strict rules, limited resources, and time limits, teams are challenged to fundraise, design a brand, exercise teamwork, and build and program robots to compete in an exciting game that includes autonomous and driver-operated periods. In the 2019 challenge, DESTINATION: DEEP SPACE Presented by The Boeing Company, two competing alliances collect samples on planet Primus. With only two-and-a-half minutes until liftoff, the alliances must gather as much cargo as possible and prepare their spaceships for liftoff before the next sandstorm arrives.

2. FIRST® Tech Challenge World Championship – FIRST Tech Challenge students learn to think like engineers. Teams build robots from a reusable kit of parts, develop strategies, document their progress, and compete head to head. In the 2018-19 game, ROVER RUCKUS Presented by Qualcomm, robots descend from the lander, collect and sort minerals into cargo holds, and perform autonomous tasks to compete on the field during two-and-a-half-minutes of gameplay.

4. FIRST® LEGO® League Jr. World Festival Expo – FIRST LEGO League Jr. introduces children ages 6 to 9 to the exciting world of science and technology. Teams of up to six children and two adult Coaches take on a real-world Challenge, to be explored through research, critical thinking, and imagination. In this year’s Challenge, MISSION MOON, students learn about the Earth’s moon and what is needed to live there.

The 2019 FIRST Championship will continue next week in Detroit, Michigan, happening from April 24 to 27 at the Cobo Center and Ford Field. Visit firstchampionship.org to learn more.

Accomplished inventor Dean Kamen founded FIRST® (For Inspiration and Recognition of Science and Technology) in 1989 to inspire an appreciation of science and technology in young people. Based in Manchester, N.H., FIRST designs accessible, innovative programs to build self-confidence, knowledge, and life skills while motivating young people to pursue opportunities in science, technology, and engineering. With support from over 200 of the Fortune 500 companies and more than $80 million in college scholarships, the not-for-profit organization hosts the FIRST® Robotics Competition for students in Grades 9-12; FIRST® Tech Challenge for Grades 7-12; FIRST® LEGO® League for Grades 4-8; and FIRST® LEGO® League Jr. for Grades K-4. Gracious Professionalism® is a way of doing things that encourages high-quality work, emphasizes the value of others, and respects individuals and the community. To learn more about FIRST, go to www.firstinspires.org.