Kickoff is starting with an intergalactic bang. Kickoff is the start of build season where all 4,000 FIRST Robotics Competition teams in 35 countries worldwide learn about the new game and game elements. This year’s game sponsor is Star Wars “Force for Change.”

During the live video Kickoff broadcast early Saturday morning on January 4, there was a surprise appearance by R2D2 during the revealing of the game and its elements. The game is called INFINITE RECHARGE with two Alliances (3 robots per Alliance) working to power their Shield Generator for maximum protection of FIRST City against incoming asteroid shower coming from a distant space skirmish.

The initial 15 seconds is an Autonomous period when the droids (the robots) launch Power Cells into the Power Port to gain points. Droids moving from the Initiation Line also gives points to each Alliance.

In the remaining 2 minutes and 15 seconds of the game, called Teleop or Teleoperated Period that is controlled by the Drive Team, Alliances must interact with other parts of the game. Shooting or placing Power Cells into Power Ports, an Alliance must score 29 total points to activate sections of their Shield Generator. This includes interacting with a color wheel that spins. A droid gain points by completing at least three and no more than five rotations of the color wheel, or by stopping the wheel on a specific color.

The EndGame, or final 30 seconds of the match, droids will race to their Rendezvous Point, which is where the Generator Switch is, and attempt to energize the Shield Generator. The Alliances must get their droids to hang from the Generator Switch, and try to make the giant Switch level with the ground. The Switch is 5’3″ off the ground, and the more droids (up to 3 robots) an Alliance can hang from the Switch, the more points that will be awarded.

At kickoff, Spartronics Alumni showed up in full force. Among them was Rose Bandrowski. She is a sophomore at the University of Arizona (Tucson). Initially, her major was undecided, but BHS Robotics sparked a fascination for STEM that drove her to study Systems Engineering.

Rose says she learned many valuable life skills from Spartronics, such as effective communication, machine shop, time management, and public speaking. She joined the team as a lead artist for the Marketing Subteam, became a team spokesperson, joined the Mechanics Subteam, and became a Team Captain!

Rose said that “there is nothing like [Robotics]. It’s a very unique experience. Take advantage of it while you’re here.” She also describes coming back to visit 4915 “is like visiting family.” Rose notes we all have a common interest and knowledge, and how Robotics creates strong bonds. She explains there is an immediate connection with people around the nation who are in, or were in, the FIRST community. 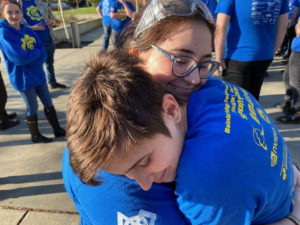 In marketing, Team Shirt and Sponsor Banner designs are being updated and plans for the Open House are being made (save the date: March 25, 2020). Marketing team members are beginning to write and prepare the Chairman’s Essay for the Chairman’s Award. The Chairman’s Award is the most prestigious award at FIRST, and it honors teams that are the best representation of a model for other teams to emulate as well as the best embodiment of the FIRST mission.

Mechanics subteam is working on inventory, buying materials for building game elements, will be building the game elements and a new driver’s station.

Electronics subteam has built a test bench with new, brushless pneumotors. Students are assembling items that came in the Kit of Parts from FIRST. They are also preparing to receive the design from Design Team. They are even developing “bling” for our new robot.

The Strategy subteam developed two different strategies for the new game. The entire team helps decide which of the two strategies to choose and then the robot building process begins.

The Design subteam is creating the design of the robot based on the final game strategy the team adopts.