One of the biggest highlights of Glacier Peak for team members, mentors and supporters in the stands was when Spartronics Team Co-Captain and Marketing Lead Jon Coonan was named as one of just two students as a FIRST Robotics Dean’s List Finalist for the Pacific Northwest Championships in Cheney, WA, April 6-8, 2017. 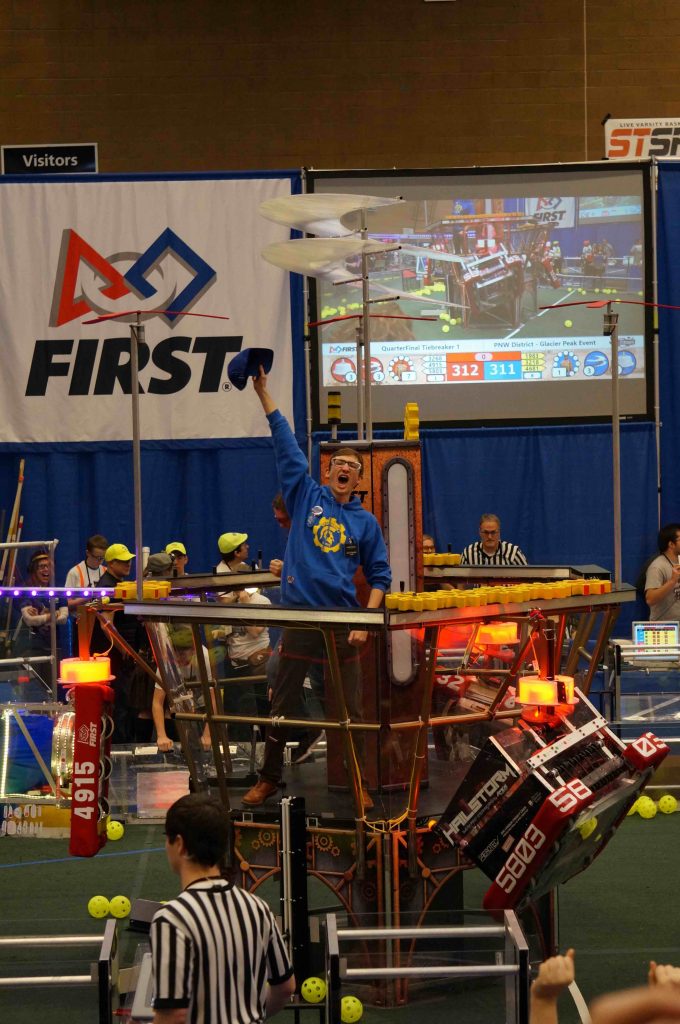 Washington FIRST Co-Founder Kevin Ross announced Jon’s name to a cheering crowd, which gave Jon and immediate standing ovation. Coonan, a Junior and BHS, is being recognized for his individual contribution to his team as well as his role in spreading the message of FIRST Robotics throughout Bainbridge Island – and beyond.

“In an effort to recognize the leadership and dedication of FIRST’s most outstanding secondary school students, the Kamen family sponsors awards for selected 10th or 11th grade* students known as the FIRST Robotics Competition® FIRST Dean’s List…The students … will not only be great examples of current student leaders who have led their FIRST Robotics Competition … teams and communities to increased awareness for FIRST and its mission while achieving personal technical expertise and accomplishment, but it is FIRST’s goal that all Dean’s List Semi-Finalists, Finalists and winners will continue on, post award, as great leaders of FIRST’s ever growing student alumni.”

Spartronics co-founding Mentor Kevin Hawkins, who has worked with Jon for three years said, “Jon has served our team as a polished spokesperson, seasoned marketer, skilled photographer and videographer, and enthusiastic fundraiser. He’s a born self-starter who embraces new challenges, and someone who will spread the word of FIRST around the globe. He knows life is more than robots, but embodies the ideals of FIRST in everything he does. Jon has that X-factor and you just know he will do great things.”

Student Addie Bjornson from Team SOTABots 2557 from Tacoma was also named as a Dean’s List Finalist for Cheney. Both will compete at the District Championship for the chance to receive the honor at the FRC Worlds Championship in Houston, Texas. FIRST Washington Founder and Chairman Kevin Ross said, “I am very excited for the future of these students.”

“I just want to thank all of our 16 incredible mentors who volunteer their time and energy to encourage us all to be successful,” said Jon Coonan, who also is a human player on this year’s Drive Team. You’ll find Jon as a Pilot retrieving and placing the gears during the competition.