Robots built from Legos? Yes and they battle in a competition unlike any other. Teams throughout Kitsap County will rendezvous at Bainbridge High School on Saturday, December 9th as Spartronics hosts a FIRST Lego League (FLL) competition! 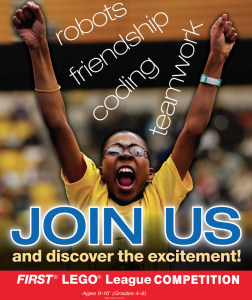 Part of FIRST – For Inspiration and Recognition of Science and Technology – students in grades 4 all the way through 8th will fill the BHS Gymnasium from 10:00 a.m. until 4:00 p.m. The public is welcome to come see this fast-paced competition live and for free.

FLL teams, who kicked off their season in August, are competing in the 2017-18 game “Hydro Dynamics.” Over the last few months, students worked together brainstorming, planning, and building the very robots that will compete at the December 9th event.

Continuing the FIRST mission of creating a solid robotics pipeline for kids of all ages, Spartronics, for the third straight year, has volunteered to host the FLL competition. Many Spartronics team members will volunteer to make sure the competition runs without a hitch.  In addition to competing with their autonomous robots, FLL teams will make presentations to a panel of judges.

Ever since Spartronics 4915 was founded five years ago, supporting and encouraging younger generations by exposing them to STEAM has been a main goal for our team. Hosting and volunteering at this FLL competition gives team members a chance to witness some of the effects that their past and continuing encouragement has had on young people on the island.

The event will be held in the BHS Gym.