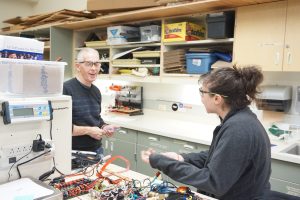 The robot is finally starting to come together as we close out the fourth week of build season. Mechanics have started the process of mounting the scissor lift to its frame. They’re also continuing to work on the robots grabber and harvester.

The Electronics subteam have begun to figure out configurations for the robots encoders and sensors.  They’re also trying to find what length of pneumatic cylinder to use in some of the robots mechanisms.

Programming has been very productive this last week. Some of their efforts have been directed towards developing advanced pathfinding for autonomous, which should lead to better performance during this phase of the game.

For those not aware, autonomous is the 15 second period at the beginning of every FRC match where robots must complete tasks without any driver input. This means robots must follow pre-programmed commands. The extra mobility granted to the robot by advanced pathfinding should give us an edge during this part of the game.

Programming has also been working on giving the robot capability for vision. In this context, vision means that the robot should be able to recognize Power Up Cubes, one of this year’s main game elements, under certain lighting conditions. This should help the robot’s driver with picking up and manipulating cubes.

Marketing is currently involved with preparing everything for the teams Chairman’s submission. Team shirts have been ordered, plus for those who pre-paid, new sweatshirts and baseball caps. We also finalized our sponsor banner: we have over 20 Sponsors this year!

Marketing is also continuing to plan for our 5th annual all-Island Robotics Open House, due to be held on March 14th. Most interestingly, the subteam has begun coming with a list of names for this year’s robot so stay tuned! 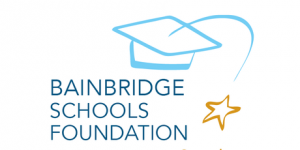 The Bainbridge Schools Foundation is an organization with a highly-focused mission: support Bainbridge’s public school system. With events such as their upcoming auction, the nonprofit has raised over $6,000,000 dollars for our schools since 2006. Its innovative grants have helped students learn by giving them opportunities that wouldn’t exist without BSF’s aid.

While the whole Bainbridge Island community has reasons to thank BSF, Spartronics is especially grateful. Six years ago, under the leadership of Vicky Marsing, BSF became our first official sponsor, providing the first funding to help start Spartronics at BHS.

This generosity has continued through to the present day, currently under the leadership of BSF Executive Director Mairead Shutt. All the donations the team has ever received in the last 5 years has gone through BSF, and BSF has never charged Spartronics a fee. We have supported each other in promoting STEAM on Bainbridge, and each year we march together in the annual 4th of July parade with our robots.

We simply cannot thank the Bainbridge Schools Foundation enough, except to tell our families, friends and supporters that when you donate to Spartronics, it would be GREAT to also donate to support BSF!

This is Marie’s Story:

Below is another one of the videos we’ve created this year to show how contributions from sponsors like BSF change students lives.