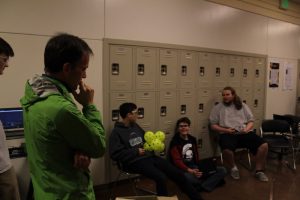 The Programmers have surpassed last year!

Our Programmers finished ahead of where they were this time last year! They have programmed the launcher, intake, and our autonomous plans. The launcher is shooting with an accuracy of up to 85%, and the intake is working very smoothly.

For autonomous we have three different strategies: one using a gear, one driving across a point line, and one shooting and then driving across the line. Our hard-working programmers have finished coding all of these autonomous modes.

Their checklist of everything that needs to be done after Bag Bay is also complete. (We get six hours in conjunction with our first competition when we can work on the robot.) Merging all their code into one place has gone well too. And, our robot can climb!

Basically, our programmers are (once again) awesome. 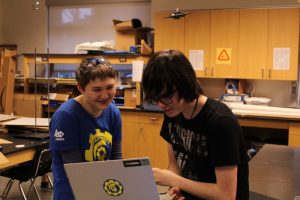 Yes, Marketers are working too…

We finalized the Pit! The home for our robot during competitions has been designed, and we have trained folks on how to assemble it, and are currently working on written instructions so any student can help put it together. The Pit is vital as it is where we fine tune and repair our robot, and talk to judges as well as connect with other teams.

Currently, we are preparing for judging during the competition. We are finishing up our Chairman’s Award video and working on our presentation. The Chairman’s Award is one the greatest honor FIRST bestows, and recognizes only the best teams that promote the values of FIRST and do extensive community outreach.

Our new Marketing brochures are nearing completion as well. We have also been getting sponsor stickers ready to attach to the poly-carb walls of our robot.

SPECIAL REMINDER: Our the annual Spartronics Open House is coming up! It’s March 15, so save the date if you haven’t already! We have been promoting this event so help us out: tell a friend.

Team shirts and zipper Spartronics-branded hoodies have been handed out, and hats are on their way along with our new robot reveal video! 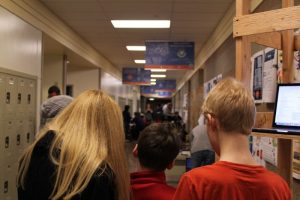 And the extremely busy Mechanics?

Everything on our robot – Highly Efficient Launching Intake Oriented System (HELIOS) – is being fine-tuned at the moment. They’ve built a functioning climber – and tested it. Our launcher, intake, and agitator (LIA) system is finished and tested as well.

The gear grabber has been refined. Our Drive Team has practiced with the robot, testing out all the systems and getting used to driving it. From this testing, our mechanics have decided to add a roller to help the agitator better feed balls into the launcher.

The lycra hopper is working very well, and we have tested it along with the other the modules. The bumpers are complete too. Just modified from last year, the robot cart is completely finished! Our intake has been tuned and completed.

HELIOS has two cameras: one on the front (with the launcher and the intake), and one on the back (with the gear and climber). These cameras are expected to work better than last year’s, the front camera is solid, and the back camera is has repositioned and made sturdier. HELIOS’s features new lights: they change color based on the direction that the robot is driving in. When we drive HELIOS forward, the lights are green, and when we drive backwards, the lights switch to red.

This year we have manufactured many spare parts as well: for the launcher, agitator, sections of the intake, and a spare motoring box for the climber. More spare parts were made this year as HELIOS has many more systems. 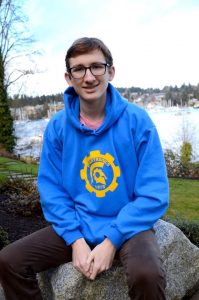 Spartronics’ 2017 Dean’s List candidate is Jon Coonan. Jon is a junior and one of the co-captains on the team and our team’s marketing leader.

Congratulations! We all hope he wins.